In this lesson we’re going to take a look at the major 7th, minor 7th, and dominant 7th arpeggios. These arpeggios are very similar to the major and minor arpeggios, but with an added 7th interval.

Like the major and minor arpeggios, the 7th arpeggios can add a bit of color to your playing, particularly when playing over a I-IV-V blues progression. Introducing the 7th interval really pulls in that bluesy feel.

In the diagram below you see the intervals of the major scale with the major 7th chord intervals highlighted. Those intervals are shown on the guitar fretboard to help you visualize the distance between each interval. This is helpful when relating the major 7th to the dominant 7th and minor 7th arpeggios to follow.

For the arpeggio forms below we’re going to rely on the CAGED system to relate the arpeggio to a chord form. Although in some cases they don’t match up with the form as strictly as the base major chord, it’s still useful to build the connections between the chord form and arpeggio.

Below each fretboard diagram is the guitar tab for the arpeggio as well as an audio clip so you can hear how it sounds.

As you go through and learn each arpeggio shape, pay close attention to the root note locations for each. The root note gives you an anchor point by which you can identify arpeggio patterns and move between

The C form major 7th chord closely resembles the major C shape chord. The only difference is the root note on the 2nd string is moved down a half step to grab the major 7th interval.

There are two root notes in the C form major 7th arpeggio, found on the 5th string and 2nd string.

When playing through the arpeggio, start and end on the bass root note, making sure to play through all of the notes ascending and descending. You can use the tab below to guide you.

The A form also is very similar to its base major form with the only difference being the root note on the 3rd string moved down a half step to the major 7 interval.

The root notes for the A form major 7th arpeggio are found on the 5th and 3rd strings. Use the bass root as your starting point for playing the arpeggio and use the tab below for reference.

The G form major 7th chord in its truest G form is very awkward and difficult to play. Instead, it’s better to play it as shown in the diagram.

The G form major 7th arpeggio contains three root notes which are found on the 1st, 3rd, and 6th strings.

The E form major 7th chord takes on the CAGED major form with the root on the 4th string moved down a half step to the major 7th.

The D form major 7th chord is formed by move the major D form root on the 2nd string down a half step to the major 7th. The position contains root two root notes, found on the 2nd and 5th strings.

The dominant 7th arpeggios contain a minor 7, as shown in the diagram below.

The C form dominant 7th chord has the bass root on the 5th string. Also note that the 5th is omitted, leaving just the root, 3rd, and 7th. Since the chord quality is based upon the major 3rd and minor 7th intervals, omitting the 5th has little impact on the chord.

The two root notes of the arpeggio are found on strings 5 and 2.

The A form dominant 7th chord closely resembles the base major A form chord. The root on the 3rd string is dropped down a whole step to include the minor 7th degree.

The dominant 7th arpeggio contains root notes on the 5th and 3rd strings. The A form arpeggio requires a couple of position shifts, which can make it a little tricky to play at first, particularly descending.

The G form dominant 7th chord is essentially the same shape as the C form, only shifted up a string to the 6th string.

The arpeggio in this form contains three root notes, found on the 6th, 3rd, and 1st strings.

The E form dominant arpeggio also contains three root notes. They are found on the 1st, 4th, and 6th strings. This particular arpeggio pattern has a nice natural flow to it that makes it easy to play.

The two root notes of the arpeggio pattern are found on the 2nd and 4th strings.

If we take the dominant 7th chord and we lower the 3rd a half step to a minor 3rd, we now have the minor 7th chord.

The only missing note is the 4th.

The C form minor 7th chord shape is a bit awkward to finger at first. You barre across the minor 3rd and root and use the 2, 3, 4 fingers to play the root, minor 7th, and 5th. Takes a bit of practice to be able to move in and out of this chord form efficiently.

The arpeggio pattern root notes are found on the 5th and 2nd strings.

The A form minor 7th chord shape is similar to the E form dominant 7th shape, only moved down a string.

The root notes are found on strings 5 and 3.

The D form minor 7th chord can be a little awkward to finger at first. You can choose to barre the ♭7 and ♭3 with your middle finger or use your middle and ring fingers to play them while grabbing the p5 with your pinky.

There are two root notes in the D form arpeggio, located on the 4th and 2nd strings.

In this lesson we took a look at major 7th, minor 7th, and dominant 7th arpeggios. Each arpeggio is made up of four notes, which include the root, 3rd, 5th, and 7th. The quality of the 3rd and 7th is what gives the arpeggio its quality. 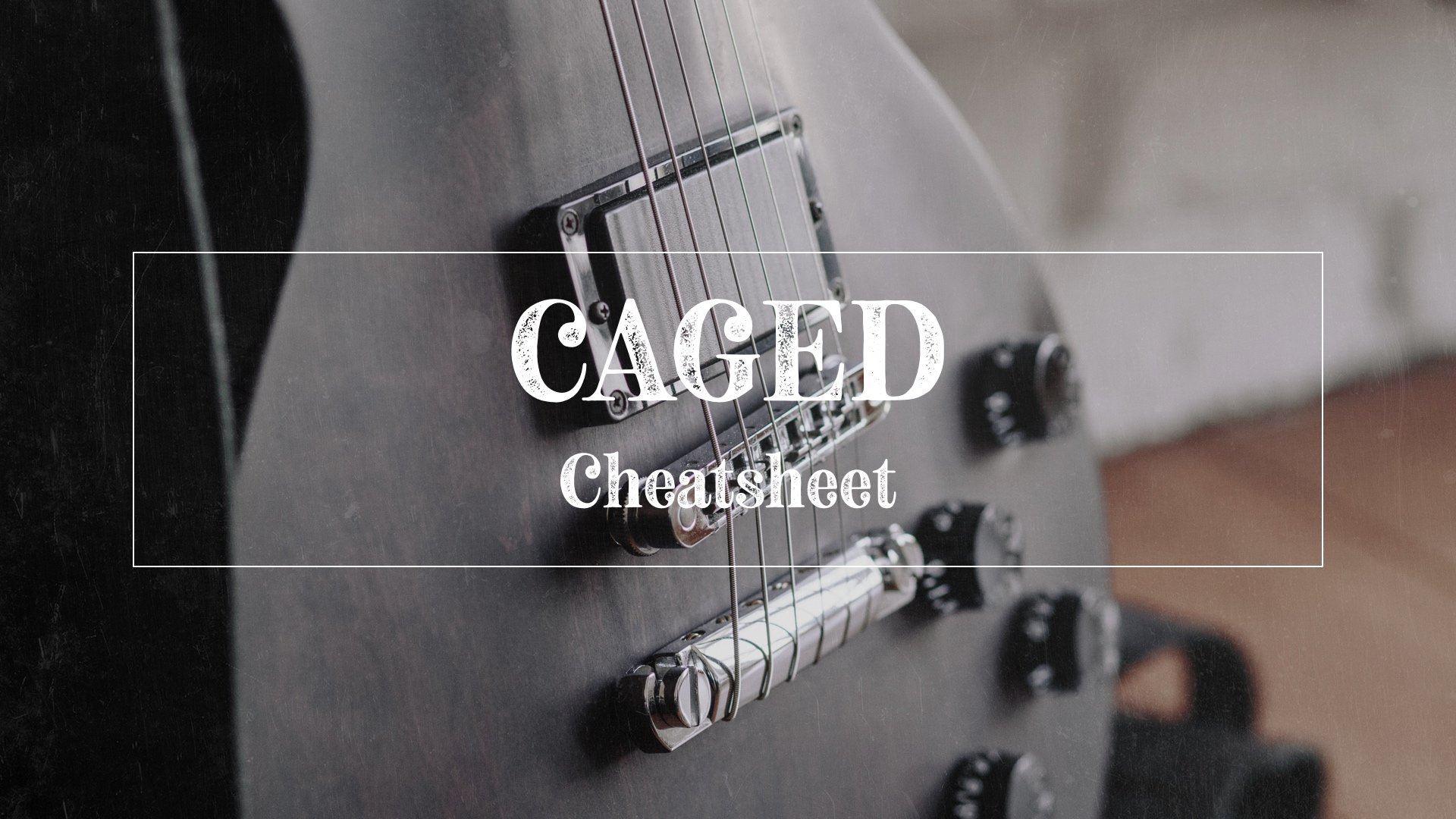 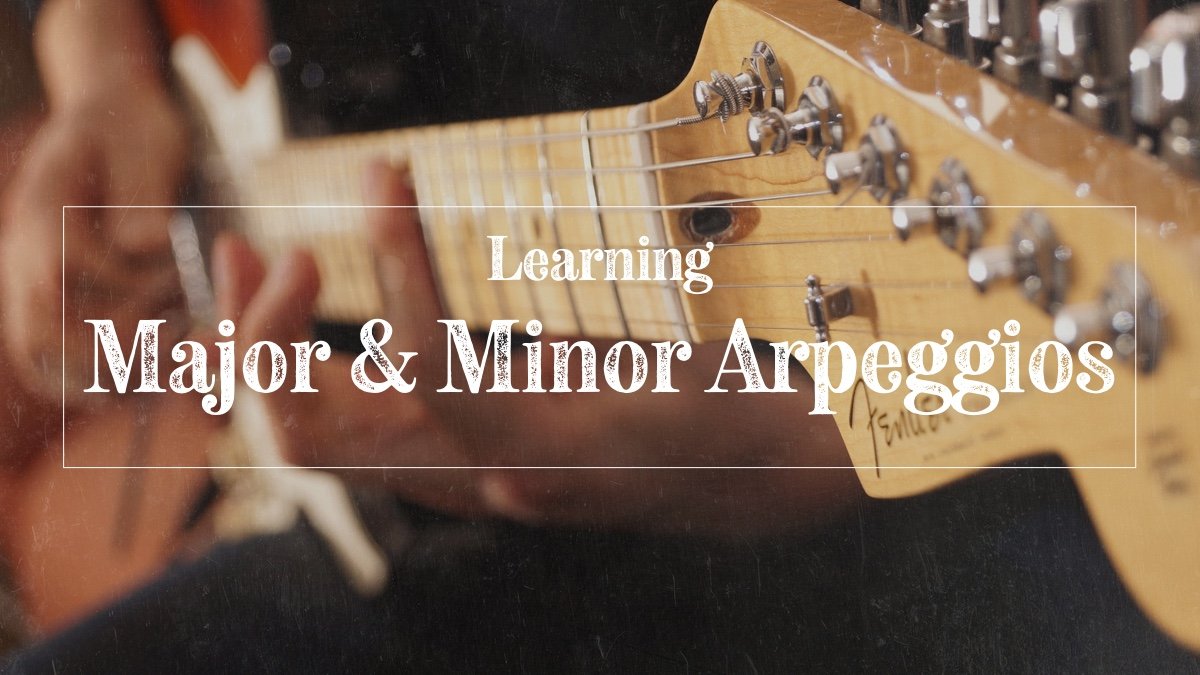 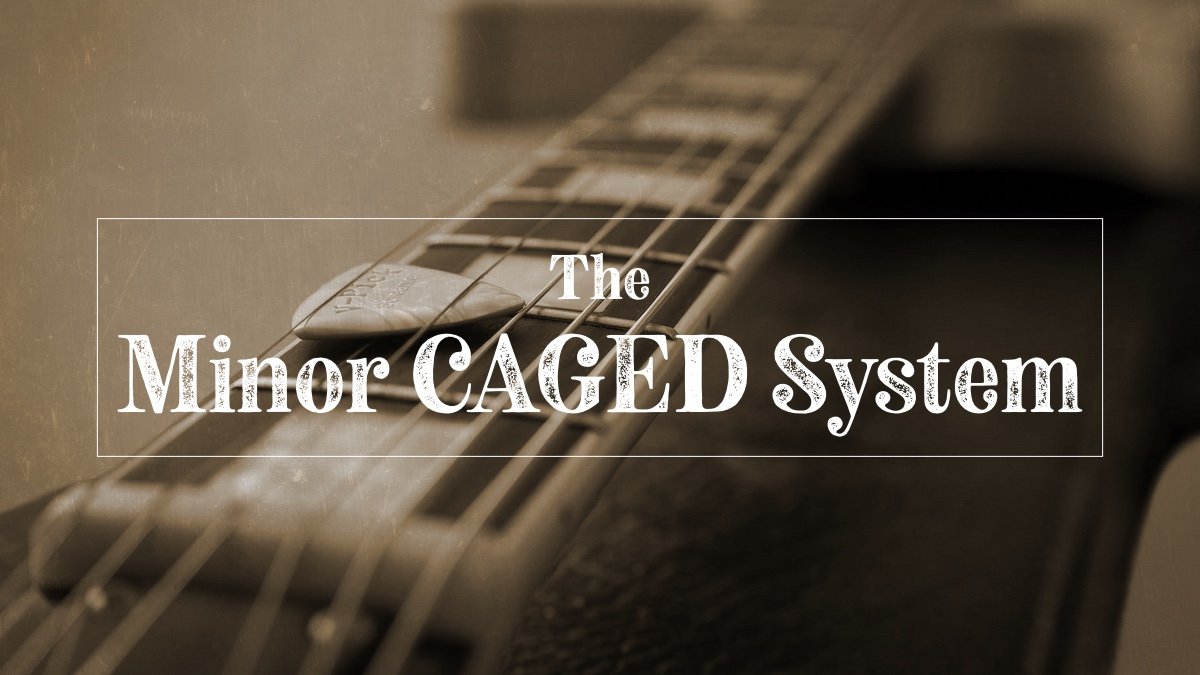